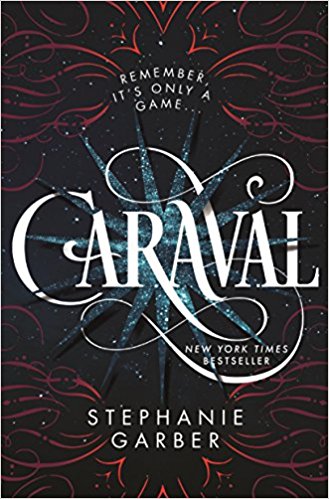 Time it took me to read: 7 days

For all her life, all Scarlett has wanted is to visit Caraval, the magical traveling show where audiences get to participate in the show. When her domineering father arranges a marriage for her, she is sure that she and her younger sister, Tella, will never get to see the fantastical performance. Only days before her wedding to a groom she has never met, she receives an invitation to be the special guest of the shows powerful leader, a man known only as Legend.

With the help of an unlikely ally, Scarlett and Tella manage to escape their island home and find their way to the secret location where Caraval is located, only to be separated upon arrival. Now Scarlett has to join the game, and she only has five nights to solve the clues of Caraval and find her sister. While dodging deadly obstacles, she must struggle to remember the most important rules of Caraval: things are rarely as they seem, and don’t get swept too far away from reality. Afterall, Caraval is merely a game, right?

I feel as if I’ve been consuming a lot of “circusy” media lately. I’ve been totally obsessed with the new movie, The Greatest Showman, and this is the second sort of circus book that I’ve read in the last month or so. But this book was really different than Daughter of the Burning City, though both had the same sort of gothic-y carnival vibe. Scarlett continues the trend that I’ve been seeing in YA recently of being a fairly flawed, naive protagonist, though not so much as some of the others that I’ve read. I like this aspect of her personality, though she is certainly not the most original of heroines I’ve ever read, and that is almost entirely why this book didn’t get the best score that it could have. Scarlett starts the book afraid of everything, but through the story learns to loosen her hold on the reigns of her life and take risks. Grow though she may through the book, it is clear from the beginning that she will endure anything to save her little sister, and that is something that seems fairly stereotypical about her character.

The world of Caraval, however, is unique and vivid, it’s characters and atmosphere larger than life. Though the interesting part is that what may seem like magic in the dark, may be far less mysterious when the sun comes up, and that’s all I’ll say. But this is definitely a world where fantasy reigns, and I like that in the books that I read.

One of my favorite parts of this book was that I really didn’t predict the ending at all. Every time I thought I had it pegged, it would tease me into thinking that I was right, but then twist everything that I thought on its head. And everytime that happened, I felt as if I was really having the experience that Scarlett had, as she attempted to figure out the game that was Caraval.

This book is brain candy of the highest degree, and I thoroughly enjoyed reading it. I think the world that Garber weaves is wonderfully rich and entertaining, but with the number of books that I’ve read recently that I feel have really impacted me, this book just didn’t make me feel changed in any way, and that I think is the only real drawback that I can report. If you like a dark, unpredictable fantasy, this book is totally for you. Especially if you’re in a circus-y mood, like I am.

If you liked Caraval, try: Daughter of the Burning City by Amanda Foody

Daughter of Smoke and Bone by Laini Taylor

Marked by P.C. and Kristin Cast