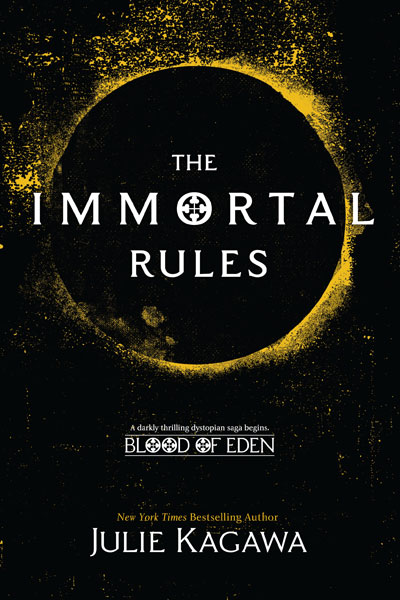 Time it took me to read: 5 days

Allison has always hated the vampires. They rule ruthlessly over every city, forcing humans to pay a blood tax in exchange for food and protection. And, as most humans who live on the outskirts of the city know, there usually isn’t enough of either one to go around. But the vampires aren’t the worst monsters out there. The city walls keep the people of New Covington safe from the rabids, horrible creatures mutated from those who were once sick from the plague that took out most of humanity. When a journey outside the wall goes wrong, Allison is forced to make a choice: die a painful death, or become one of the creatures that she so despises.

Zeke and his makeshift family have been searching for Eden, a city free of vampire influence, for many years. When Allison stumbles upon Zeke and his group, her decisions will determine who she will become. Will she cling to her own humanity, or embrace the inner demon raging inside?

I feel as if I have to start out by saying that I am a huge, long-time fan of Julie Kagawa. Her Iron Fey series was one of the first to get me into reading books about the fairy folk. So this series, The Blood of Eden, is quite the split from what I know of her.

This story, like basically every book I’ve read this whole month, took me quite some time to get into. I feel like this book spent a lot of time on backstory, which, if it were me, I would have put in flashbacks throughout. The whole first half of this book is leading up to the catalyst of the entire series, which is Allison joining a group of humans to find the one city on the continent free from vampires and rabids. This doesn’t happen until about page 200, which seems excessive to me.

Sorry, I’ll end my rant there. In the end, this book won me over. I really enjoyed Zeke as a character, and honestly I think that his effect on Allison really warmed her to me. Allison seems to flip flop for a lot of the beginning of the book. Sometimes she’s aloof, sometimes she is serious and pensive, and then sometimes she is this total smart mouth. It seemed fairly inconsistent to me, but she evens out when she joins Zeke and his group of Eden seekers.

I’m totally on the hook for the series, though, because I think that this whole post-apocalyptic vampire story is a pretty neat twist. I’ve read lots of dystopia, and usually if they pick a monster, they pick machines or zombies. I’ve never read one that picked vampires, before, and it’s certainly an interesting twist because, typically, zombies aren’t that interesting to read about as characters because they basically only have one primal motive. Vampires are much more human, and I think that Kagawa weaves them into her post-apocalyptic tapestry brilliantly.

I have to say, it’s kind of fun going back into the world of vampire books. I used to read a lot of vampire books in my high school days, but it has been quite a while now, and I’ve noticed the trend is dying down rapidly in YA.

The kind of sad thing is, that this was probably my favorite book that I’ve read so far this month, and it only has a 3.5 rating. I’ve been hitting a couple of duds in a row on my stack, but I’m going on a Barnes and Noble run soon, so hopefully the last week of the month will yield something more promising. But if you’re a fan of dystopia and vampire books, I certainly recommend The Immortal Rules, as it is a fascinating blend of genres that you can really sink your teeth into (I’m not sorry for the pun).

If you liked The Immortal Rules, try: The Iron King by Julie Kagawa

The Coldest Girl in Coldtown by Holly Black

One thought on “The Immortal Rules by Julie Kagawa”